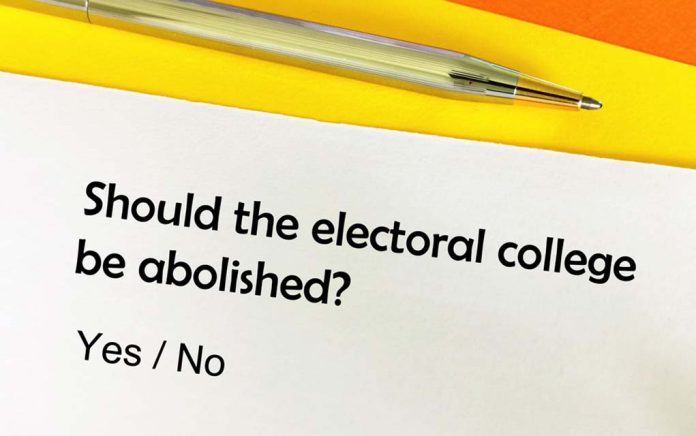 (LibertySons.org) – There have been discussions about dismantling the electoral college for decades now. Detractors dismiss the system as undemocratic and claim a popular vote framework would work better.

So, what’s really going on?

What Is the Electoral College?

The electoral college is the mechanism through which the American people elect their presidents. Each state has a number of electors that reflects its population size. When you go to the polls, you technically vote for the elector who represents your preferred candidate, not the candidate themselves.

There are 538 electors in the electoral college. A candidate needs a simple majority of 270 to be guaranteed victory.

Why Do Some People Want to Get Rid of It?

Most states require all their electors to vote the same way. Therefore, if one candidate gets 51% of the popular vote in a state and another candidate gets 49%, the former candidate claims 100% of the electoral votes.

Critics of the electoral college feel a popular vote system would be more equitable, as every vote would play an equal part in choosing the president.

Why Should We Keep the Electoral College?

While there are valid arguments against the electoral college, its benefits outweigh its drawbacks. The current framework is the best way to ensure power is distributed equally among the states.

If we created a system whereby state geography did not matter in presidential voting, a huge amount of power would instantly shift to large urban areas. States like New York and California would attract all the focus of electoral candidates. On the other hand, states without big cities (which is most of them) would become unimportant for presidential hopefuls.

Over time, sparsely-populated regions would be forgotten about. Their interests and culture would cease to be a priority for those in the White House. The only way to prevent this is by maintaining a system that gives smaller states a voice.

There should always be a healthy and respectful discourse about matters like these. The ways in which we elect our leaders affect all of us and everyone should be involved in the debate. Whatever your views on the electoral college, the most important thing is that you make your voice heard by voting.