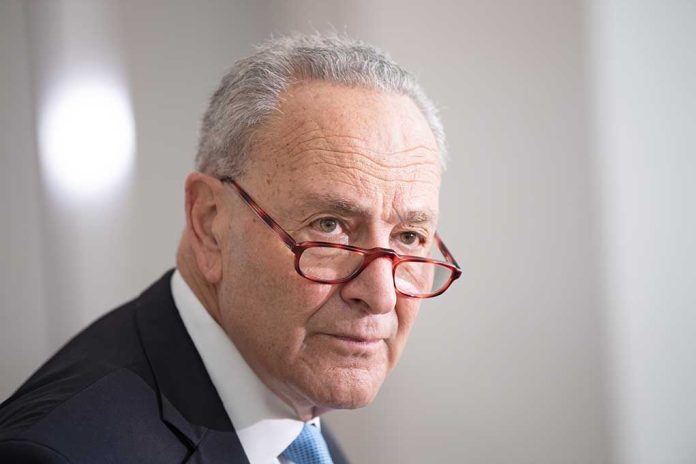 Tucker Carlson Calls Him a Coward on Camera

(LibertySons.org) – On the May 17 airing of “Tucker Carlson Tonight,” host Tucker Carlson went after Senate Majority Leader Chuck Schumer (D-NY) for refusing his invitation to appear on the show. Schumer recently sent a letter to Fox News and spoke about the host on the Senate floor, calling Carlson a threat to America for spreading the idea of the great replacement theory and a catalyst for the deadly mass shooting in Buffalo, New York. Carlson invited the Democrat to come on his show to discuss these views.

Tucker Carlson blasts Chuck Schumer for calling for media censorship and then refusing an invitation to go on his show to discuss it:

"Because he is a coward, this is the only media appearance probably in history he has turned down." pic.twitter.com/1sNA0jUrpp

Schumer acknowledged the invitation and declined it in a tweet on May 17. He also maintained his call that Carlson is dangerous.

.@TuckerCarlson invited me on his show tonight to debate the letter I sent to @FoxNews.

In response, Carlson went on air to tell viewers about Schumer’s letter. He spoke about how the senator feels the show is a tool to spread threatening messages and that Fox should take it off the air. He pointed out how this is censorship called for by a leader holding federal office, which, in the past, people would have refuted as a violation of the First Amendment’s freedom of the press rights.

Carlson explained he wanted to hear more from the New York lawmaker, which prompted the invitation. Upon the Democrat’s refusal to show, the host called Schumer “a coward.”