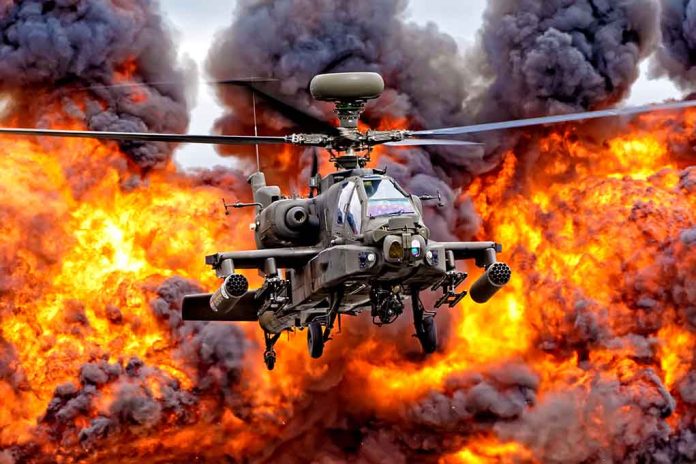 (LibertySons.org) – The official Twitter account for Ukraine’s Ministry of Defense has been trolling Russia throughout the conflict between the two countries. Ukraine’s latest taunt came on Halloween, showing a video of its military shooting down one of Moscow’s helicopters. In the accompanying post, the authors of the post remarked this was a how-to on turning an “Mi-8 into a flaming jack-o-lantern.”

The video circulating on social media has been viewed more than 800,000 times since being posted on Halloween. https://t.co/1TY2XPpyWU

The longer version of the video from OSINTtechnical showed a missile striking the aircraft. Despite a large trail of smoke, the vehicle fought to stay in the air before crashing into the ground in a fiery explosion. The post noted the event occurred near Berestove, Donetsk Oblast.

But the crash video wasn’t the last word from the Defense of Ukraine account marking the spooky holiday filled with quips mocking the Russians. Another post on Halloween suggested sending Ouija boards to Moscow so its people could contact the members of their military who have died in the conflict.

Such tactics are nothing new from this account. In August, those running the Twitter published a video with a clear message telling Russian troops to get out or they would die, setting it to the song “Run Rabbit Run.”