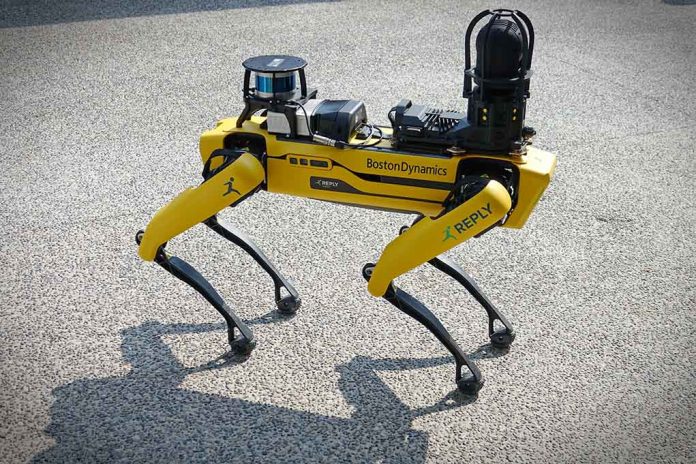 This ROBOT DOG Is Armed With a Machine Gun

(LibertySons.org) – Alexander Atamanov, a Russian hoverbike company founder, released a video showing a robotic dog with a machine gun on its back. Footage features the metal pup running around firing ammunition at targets, struggling with balance a bit from each shot’s recoil. The UnitreeYushu sells for $3,000 online but comes without the weapon.

Still, a similar machine could exist. The Air Force announced the arrival of robotic dogs at Tyndall Air Force base in March 2021. The Quad-legged Unmanned Ground Vehicles (Q-UGVs) patrol to monitor for issues around the base — without firepower.

At the Association of the United States Army’s convention in 2021, Ghost Robotics debuted similar pieces of machinery that carry sniper rifles. The potential of the technology as a remote weapon system was a highlight of the presentation.

A chilling video reminiscent of Black Mirror of a robot dog opening fire with a submachine gun strapped to its back is a preview of future warfare. (Latest news at https://t.co/EGO0zsqUhM) https://t.co/qpP5UUyHGk

Boston Dynamics also has a canine bot that, among other functions, dances for human entertainment. Yet, when the device hit the market, one Vice reporter warned these cute robots had the ability to develop into a threat. While the company policy states consumers cannot use the products as weapons, other creators may not be so strict about their machines. The possibility exists that these devices could fall into the hands of individuals who wish to use them for nefarious purposes.

Atamanov, who lives in New York, didn’t respond to requests for comment about the video of the armed dog bot.