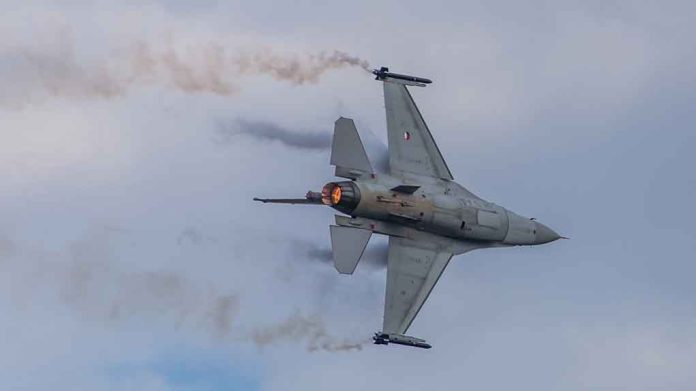 (LibertySons.org) – After an emergency, an F-16 fighter jet belonging to Taiwan crash-landed at the Daniel K. Inouye International Airport in Hawaii. The incident happened on June 6 around 3:00 p.m. A US Air Force pilot was flying the craft when it experienced an issue, and the person requested an emergency landing at the civilian airport.

Officials said the craft appeared to have an problem with its landing gear. Airport personnel put up a netting barrier to assist, and the nose gear of the jet collapsed upon impact. The runway suffered no damage, but the pilot went to the hospital, where medical personnel treated and released him.

Initial reports incorrectly said the aircraft belonged to the US Air Force’s 15th Fighter Wing. Officials said the jet is the Taiwanese Air Forces’ craft, which has been traveling between the US and Taiwan to provide defensive arms to the Asian nation. The jet had a scheduled stop in Hawaii as part of this mission but at the base, not Inouye International.

The US often sells this type of jet to Taiwan and also has a program to upgrade older models for the country. The media in Taiwan reported the jet was on its way back to the country for an upgrade from Luke Air Force Base in Arizona when the pilot was forced to land.

The accident marks the fourth recently involving military crafts. On March 23, an F-16 crash-landed in Louisiana. Two other problems occurred on May 11 and May 31, both involving Fighting Falcons of the South Dakota Air National Guard going off the runway. No pilots suffered significant injuries in any of the incidents.