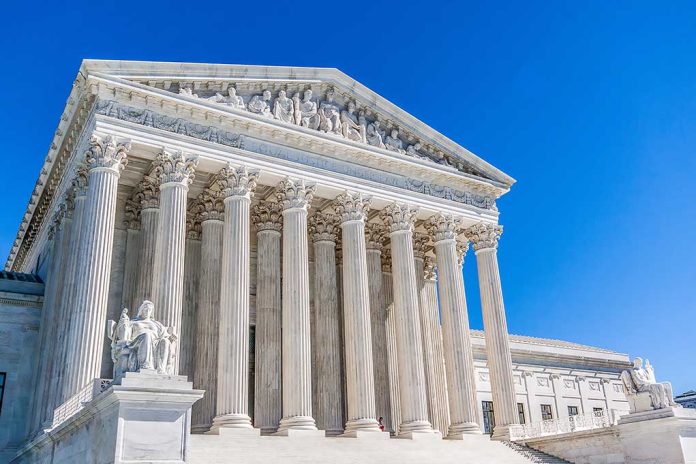 (LibertySons.org) – Gun rights advocates scored a huge win when the Supreme Court struck down a New York law restricting the carrying of concealed weapons. The law required gun owners who wanted to carry in public to provide justification for doing so in the Big Apple. However, in a 6 to 3 landmark decision, the conservative court ruled the conditions the law placed on citizens violated their Second Amendment rights.

The Conditions Were Over the Top

The state of New York enacted a law in the early 1900s that required people in the state to exhibit a favorable moral character and a specific need to carry firearms for self-defense. The court found the conditions infringed on the rights of lawful gun owners.

The majority opinion noted that no other right is contingent on the government’s approval. For example, the First Amendment doesn’t require permission from the government. People are free to say what they want, print what they want, and worship how they want, without the need to apply to an authority. However, that right doesn’t exempt individuals from consequences should they abuse it, which can only be determined by due process.

At least five other states have similar concealed-carry restrictions. Under the Fourteenth Amendment, the fundamental rights an American holds can’t be overruled by state law. The right to bear arms is a perfect example, plainly stating it cannot be infringed. The gun control laws in other restrictive states could certainly come into question with the new ruling.

There are other implications to the ruling. Gun rights advocates may be able to make a case against any sort of regulation of a legally obtained firearm. Laws that some find restrictive, such as long waiting periods and extensive questionnaires that border on registries, may also find new hope with the opinion.

A Shift in Momentum

The news of the Supreme Court’s ruling comes shortly after the Senate announced a bipartisan bill restricting gun rights. Fifteen Republican senators joined Democrats to pass reforms criticized by some as a step in the wrong direction. Others say the act includes common-sense provisions like enhanced background checks for 18 to 21-year-olds and restrictions on gun ownership for domestic violence offenders.

The bill passed the House of Representatives on June 24 and made its way to President Joe Biden’s desk for approval.

Last week’s decision shows that the court is taking the rights of the people seriously.