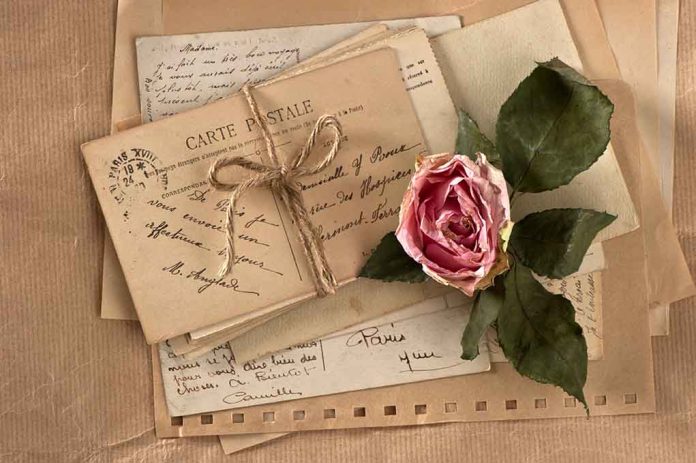 (LibertySons.org) – Living in an old house can be exciting, especially when you start to reveal the secrets of the people who lived there before. Homeowners have discovered everything from attics full of vintage clothing to thousands of dollars hidden in the walls by past residents who simply didn’t trust banks. What one UK homeowner recently found, though, was a bit more like the plotline for a Harlequin romance novel than the after-effects of caution.

Dawn Cornes and her 14-year-old son Loukas engaged in a bit of housework when a TV fell from the wall, breaking tiles. As they cleaned up the mess, Cornes spotted something unusual: an old letter.

Despite difficult-to-read handwriting and worn paper, Dawn successfully read the nearly 100-year-old love story with the help of a few friends in a Facebook group. That’s when she discovered a surprising twist.

The amorous couple exchanging sweet nothings in the letter was a man named Ronald, whose last name was either Habgood or Halgood and an unnamed married woman. Ronald begged her to keep their relationship secret while also imploring her to come to see him every morning. He reminded her to use caution, warning that revealing their affair would cause trouble for the married woman. He then declared his love for the woman and set up a meeting spot at a tram stop in Fulwood.

The letter contained no date, but records show Dawn’s home was initially built in 1917. Her online friends seemingly confirmed this timeline, suggesting that the very old paper and handwriting style favored trends in the 1920s. Fulwood’s trams haven’t been in operation for about 80 years, either; the note is probably close to 100 years old.