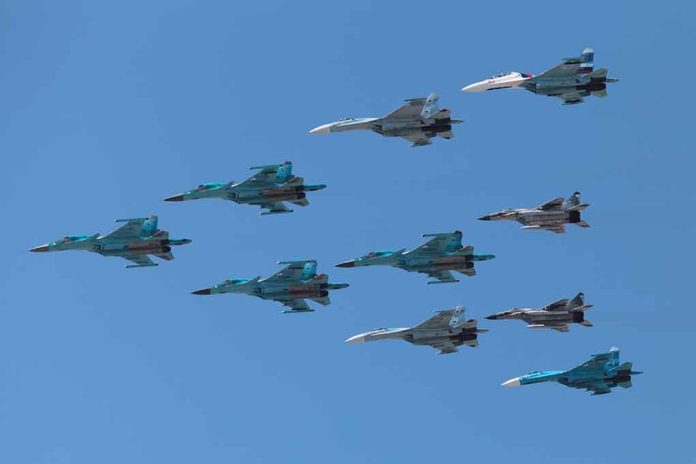 (LibertySons.org) – The Russian attack on Ukraine continues to rage into week two, with the Kremlin slowly gaining ground. Now, aviators told Newsweek Russia has complete control over Ukraine’s airspace. The move leaves Ukraine’s air force grounded with no real defensive options. The latest news is tragic for Ukrainian forces and could be a significant turning point in the conflict.

If they were to fly, Russian troops could shoot them down. Retired US Navy commander Ward Carroll told the publication it also means sending more aircraft to the nation is pointless.

#NoSpin | "I fear this is the time they (Russia) will increase in air power, bombardments, attempt to capture large cities…Ukraine is in for some difficult days ahead": Lt General DS Hooda, Former Northern Army chief#UkraineRussiaWar pic.twitter.com/sRbOMbFC2m

Carroll explained Ukraine could not do much more than quick strikes before getting back on the ground and hiding. Even with some of its anti-aircraft options, the country really can only attack “assault helicopters” or get those trying to land. He said Russia’s control over 10,000 feet gives them the power to manage all surface-to-air missiles.

The situation is dire because Ukraine will have trouble targeting even Russian ground forces, which means airspace control also lets Kremlin troops have more freedom of movement on the ground. If Ukraine cannot regain its airspace, Russia could have an open door to take over all the large cities and any other area Russian President Vladimir Putin desires.