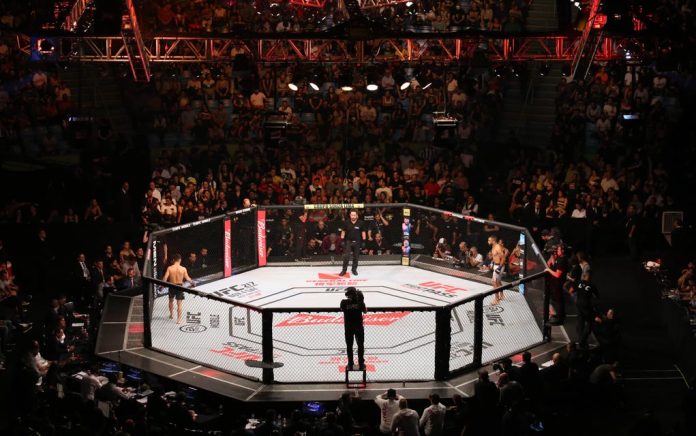 (LibertySons.org) – The Ultimate Fighting Championship (UFC) was one of the first sports to return to live events during the pandemic. Florida Republican Governor Ron DeSantis’ relaxed COVID-19 protocols allowed the UFC to return to business when other governors said no. It appears fans haven’t forgotten as they greeted the governor with loud cheers at an event on April 9.

Listen to the crowd roar.

This is why Democrats are abandoning Florida. They have utterly lost the culture war. Other red state governors take note.

The base demands fighters 🥊

According to National File, DeSantis and UFC President Dana White worked to reach a deal to allow UFC 249 to take place in Jacksonville in May 2020. While there was no live audience at the time, it was a significant step toward getting sports going again after the lockdowns. The UFC eventually returned to Las Vegas, which is home to its headquarters, but White promised it would come back to Florida.

In May 2021, UFC 261 was a massive success. Action News reported it marked the first live sporting event in the United States since the beginning of the pandemic. And it happened in Florida.

On April 9 at UFC 273, the crowds were back in the Sunshine State with the governor in attendance. UFC announcer Jon Anik introduced him as “my governor,” and the fans went wild. DeSantis entered the arena like any prizefighter, giving high-fives to fans as he walked to his cage-side seat.

The governor’s popularity with fans isn’t surprising, given his history with the UFC. They showed him clearly and decisively that they hadn’t forgotten all he did for the sport.