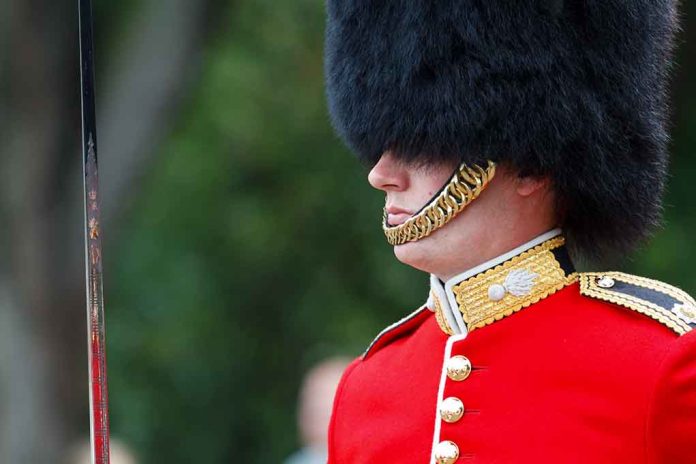 (LibertySons.org) – The death of Queen Elizabeth II on September 8 began a long process of mourning for the British public. One of the ceremonies involved is taking place at the Palace of Westminster, where the queen lies in state so people can pay their respects. Despite the importance of the affair, an attending guard is the one who made news on September 15, when he passed out while on duty.

"Videos of the incident that quickly went viral online showed the man wobbling and struggling to stand on the stage …"https://t.co/xKOcHp4gTT

The man left the podium beside the coffin for a few moments before stepping back on. Then he began swaying and passed out, landing on the hard stone floor. Onlookers gasped as police came to assist. No further word has surfaced about his condition or identity.

The guards have the task of watching over the queen’s coffin during the event, which began at 5 p.m. on September 14 and will run until the date of her funeral on September 19. They come from three units: Yeoman Warders of the Tower of London, Household Division, and Sovereign’s Bodyguard. Visitors may visit the queen 24 hours a day.

The expectation is hundreds of thousands of mourners will come to see the late monarch. She was much loved and honored. Upon her death, King Charles III recognized the deep loss all experienced and noted the family would take comfort in knowing so many people loved her.