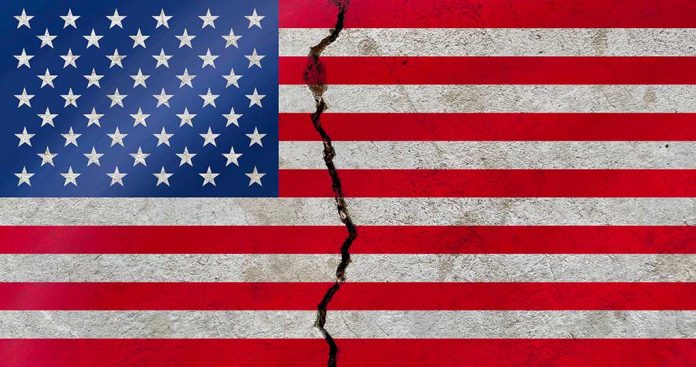 (LibertySons.org) – On December 20, 1860, South Carolina became the first state to secede from the US. This act started a chain of events that would lead to over four years of war and the loss of about 750,000 lives. It was devastating to the country, but could it ever happen again?

Americans might think the radical move is unthinkable. However, in a June 2021 poll from YouGov and BrightLine Watch, which asked respondents if they would support leaving the US to form a new union with states in their region, the results were shocking.

They showed serious support for secession and a clear divide among party lines.

At 44%, Southern states supported the idea more than any other region. Southern residents in support were largely Republicans (66%). Pacific states were right behind, with 39%.  Of them, 47% of Democrats want secession. Other regions by political party showed Democrats supporting secession more in the Northeast, Republicans in the Mountain states, and Independents in the Heartland.

What is most interesting about the poll is it is a reflection of America’s current divisive atmosphere.  It is not one political party interested in secession; it is all of them. The outcome is a clear indicator of how politically split the country currently is.

The pollsters recognized the “controversial and divisive nature of these results” and gave a warning.  According to BrightLineWatch, “…this survey item reflects initial reactions by respondents about an issue that they are very unlikely to have considered carefully.” They also note that secession is serious and answering a survey question is not.

Nevertheless, the results are unsettling because an average of 37% of poll respondents show they would support leaving the Union. What would your answer to the poll question be? Is secession the answer to political upheaval?  Reply to our email and let us know what you think!