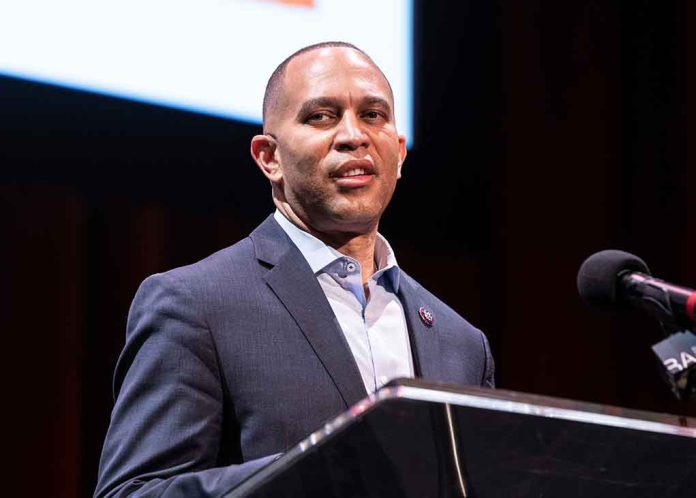 Hakeem Jeffries Will Replace Nancy Pelosi in next Congress

(LibertySons.org) – On November 17, Speaker of the House Nancy Pelosi (D-CA) announced she was stepping down from leadership. Her statement was a notice to the party that they would need to find someone else to take her place to lead House Democrats. Representative Hakeem Jeffries (D-NY) quickly stepped up, running unopposed, and secured the position after a vote of overwhelming support.

Jeffries will serve as the minority leader when the 118th Congress begins in January because the Republicans will then hold the majority. The New York legislator will be the first Black leader for Democrats in the Lower Chamber.

A native Brooklynite, the 52-year-old serves the Eighth Congressional District and is currently the fourth highest-ranking Democrat in the House. He is on the House Judiciary and Budget Committees and is Chair of the House Democratic Caucus. Jeffries is described as a social justice warrior who has fought for lesser sentences for some drug offenders and the removal of racially offensive language in federal laws. He was also instrumental in the 2020 Trump impeachment trial.

In a statement, Pelosi offered congratulations to Jeffries and the other two newly elected figureheads. Her message was that these new leaders would energize the party and usher in a new generation that would help the Left move into the future.

Jeffries’ press release after his election thanked his fellow members for their votes of confidence. The lawmaker expressed his intentions to work on behalf of all segments of society and reach across the aisle whenever he can to work with Republicans.