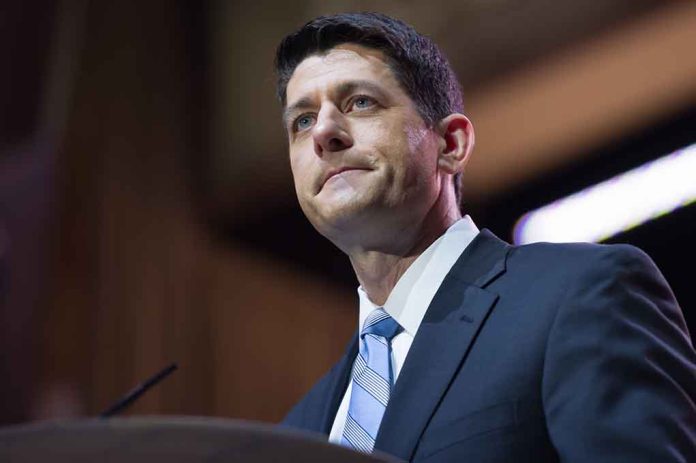 (LibertySons.org) – At an event on June 1, former Speaker of the House Paul Ryan (R-WI) threw his support behind Representative Tom Rice (R-SC). Rice made waves within the party with his anti-Trump stance and vote to impeach the former president. Getting on the wrong side of former President Donald Trump is not a good move within the GOP, but that likely influenced Ryan to endorse Rice because Trump isn’t a fan of the former speaker either.

Former House Speaker Paul Ryan: “There were a lot of people who wanted to vote like Tom [Rice] but who just didn’t have the guts to do it….Tom Rice is a man of conviction…Tom Rice is the kind of person you want in Congress.” https://t.co/eXKS0asQCO

Ryan spoke in support of Rice’s impeachment vote, saying it took courage. He said he stood up for the Constitution in the face of strong opposition. He said it took the strength of conviction and applauded the representative for not backing down.

However, Rice’s position could be in trouble due to his anti-Trump views. The GOP members in his state censured him for the impeachment vote against the former US leader. Still, getting the endorsement from Ryan on top of the one he already had from former New Jersey Governor Chris Christie may help him turn the tide.

The former speaker noted Rice is the type of person the GOP needs in Congress, not someone simply trying to help Trump exact revenge. Ryan explained he is backing the representative because he believes Rice will get the job done after seeing him operate when they served together on the House Ways and Means Committee. This endorsement marks the former speaker’s first in the 2022 election cycle.