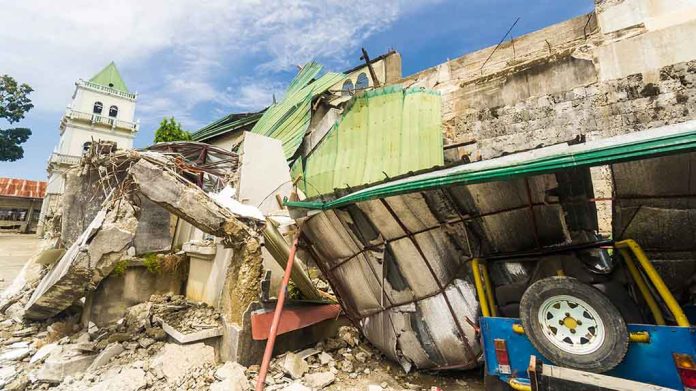 (LibertySons.org) – At around 8:43 a.m. on Wednesday July 27, a 7.0 magnitude earthquake rocked the Philippines. The event caused multiple landslides and structural collapses, leading to the deaths of 5 people and injuring more than 130 others. Sadly, the numbers could increase as rescuers reach remote locations.

The disaster struck around the Abra Province mountains, six miles under the Earth’s surface. Officials said falling debris from crumbling buildings and blocked roadways added to the devastation. They reported no damage to the hydropower dams, and experts explained there were no tsunami concerns due to the quake being too far inland.

Philippines President Ferdinand Marcos Jr. addressed his people in a news conference, saying he would not schedule visits to the damaged areas until possibly Thursday. He explained the delay is to avoid impeding the work of emergency personnel and local officials.

The Pacific islands make up part of what’s known as the Ring of Fire. The entire region is a gathering of faults, which experiences tectonic plate grinding, increasing the chances of strong earthquakes. The area has produced 90% of all seismological events in history.

The nation has had horrific disasters in the past. A couple of these events occurred in 2012 and 2013, leaving almost 100 dead, and a 2019 Manila quake killed at least 11 people.