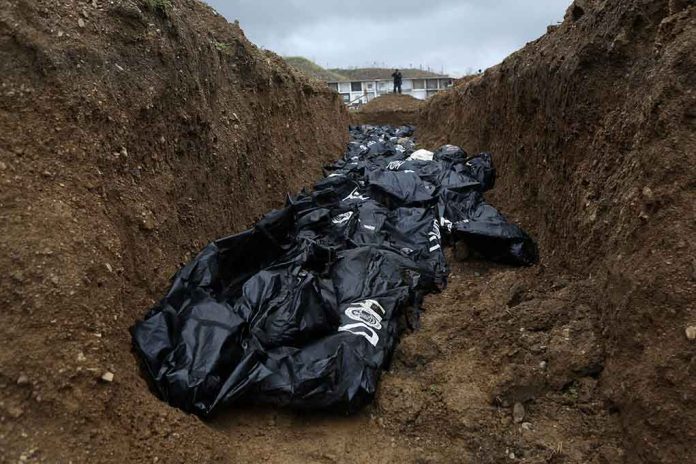 (LibertySons.org) – Russia is under scrutiny by the United States and the European Union for war crimes in Ukraine. New reports of mass graves in multiple cities in Ukraine are doing nothing to help the Kremlin’s case. These gruesome discoveries show Russian troops are killing civilians and disposing of their bodies in a horrific manner. Some observers suggest it’s the military’s way of covering up their criminal actions.

The Kyiv Region Police reported the discovery of two mass graves in a Facebook post on April 20. Officials said the bodies were people from Borodyanka in the Bucha region, including a 15-year-old girl and two others in one grave and four men and two women in the other. They explained these were people killed by the Russians, and some of the bodies had evidence troops tortured them. They noted all were civilians.

In an interview published on April 9, Bucha Mayor Anatoliy Fedoruk told the Voice of America that Russian forces killed 320 innocent people. He said some of the victims suffered torture before their deaths. He also explained that it is a daily occurrence to find more bodies throughout the city.

According to The Epoch Times, officials at the Kremlin deny all accusations of torture and murder against civilians in Ukraine. They suggested Ukraine authorities are making up the incidents in an attempt to urge other countries to place more sanctions on Russia.

The reports of the atrocities in Bucha come as news surfaces of mass graves found in Mariupol. The Washington Post published satellite images from Maxar Technologies showing gravesites in four areas of the city on April 21.

According to data, the publication reported these appear to be new sites, having become visible near the end of March. Maxar Technologies claims there are over 200 new plots in total.

The Washington Post also reported the Mariupol City Council issued a statement on Telegram saying they think these graves might hold up to 9,000 bodies. They said Russian troops dug and filled them and continue to do so each day in April. The statement also claimed the bodies in the grave are several layers deep.

In an interview with the Guardian on April 1, Mariupol Mayor Vadym Boichenko said the Russians are burying bodies within his cities to cover up their war crimes. He said they drive along the streets and collect the deceased in trucks, taking them to Manhush to bury in mass graves. He said they just toss them into pre-dug trenches.

The Washington Post stated that Russian officials haven’t responded to these claims. However, Russian Vladimir Putin did declare complete control over Mariupol on April 21.

While these reports come only from officials within Ukraine without outside verification, the situation doesn’t look good for the Kremlin. The evidence is piling up, and if the claims are valid, this would be a disgusting display that Russia doesn’t care about the value of human life. It shows the country is driven only by the desire to capture Ukraine as its own territory at whatever cost.