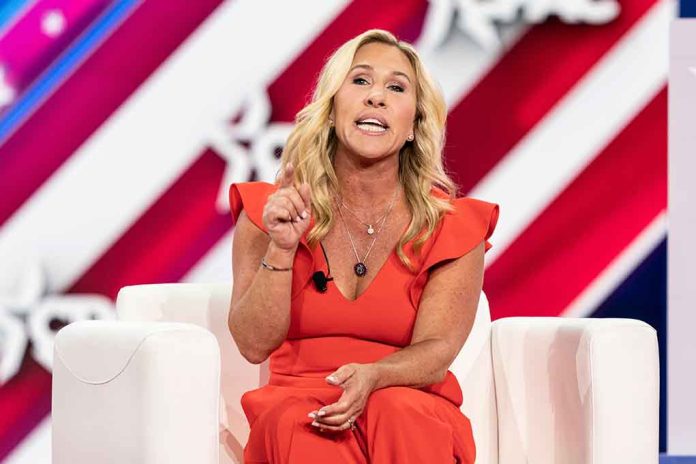 Top Republican Surrounded by Cops – They Were Armed!

(LibertySons.org) – Democrats have made Rep. Marjorie Taylor Greene (R-GA) one of their prime targets during her first term in Congress. Speaker of the House Nancy Pelosi (D-CA) even allowed her party to strip the lawmaker of her committee seats. Now, someone has put the Georgia congresswoman’s life in danger.

On Wednesday, August 24, Greene posted a message on Twitter, telling her followers that she was the victim of “swatting” at around 1 a.m. ET. The term refers to when someone calls in a false police report about a serious crime underway to provoke a large, armed response through law enforcement.

Last night, I was swatted just after 1 am.

According to the Rome News-Tribune, the police received a call about a man being shot multiple times in the congresswoman’s home. The prankster added that a woman was in the house, and she possibly had kids with her. Officers responded, but Greene assured them everything was fine. Law enforcement reported the person called back, claimed responsibility, and said the lawmaker’s position on transgender rights was the reason for the trick.

On Thursday, news reports indicated the congresswoman was once again swatted at about 2:53 a.m. ET. That time, a call went through to 911 from what appeared to be a suicide crisis line, and a man claimed someone had just come out as trans and killed their family. Again, police were dispatched to Greene’s house.

Greene’s spokesperson Nick Dyer said the congresswoman was a “victim of a political attack on her family and home.” The lawmaker told Newsmax, that the person who made the call wanted her to be killed by the police.

.@RepMTG on being targeted in a "swatting" incident at her home: "This is how they get people killed… it's like political terrorism."

In 2020, a 60-year-old Tennessee man had a heart attack and died during a swatting incident. In 2017, in Wichita, Kansas, police shot and killed 28-year-old Andrew Finch during a similar call.

Police are investigating the incident against Greene.