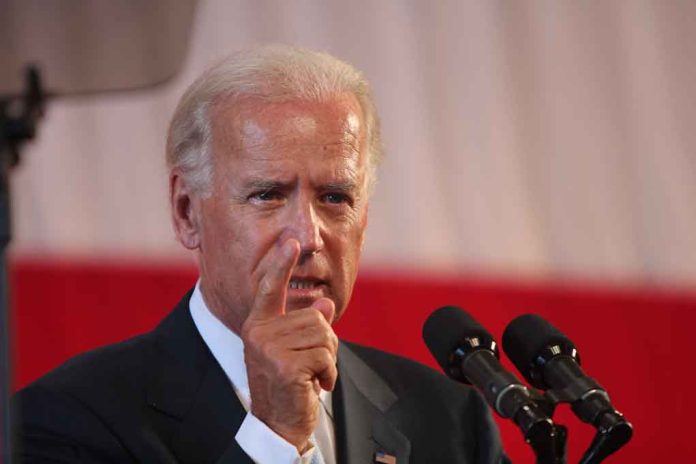 (LibertySons.org) – After a difficult meeting with Democratic senators on January 13, President Joe Biden answered questions from reporters on Capitol Hill. What began as a quiet and subdued conversation between the commander-in-chief and press members quickly devolved into a shouting match tinged by strange behaviors.

During the exchange on January 13, the president had to admit that his move to abolish the filibuster in order to pass voting rights legislation was dead in the water.

President Biden: "I hope we can get this done, but I'm not sure." pic.twitter.com/N7csgdbmjG

A frustrated Biden first warned the crowd of reporters not to ask any complicated questions like whether he could pass voting reform legislation. He expressed hope for that eventual outcome but signified a shocking lack of confidence in his own abilities.

The president seemed frustrated, raising his voice to rant about reform legislation’s contentious and challenging future. He explained that voting reform is “about who gets to count the votes” and then repeatedly shouted at the crowd to “count the vote!”

Notably, Biden also cautioned the crowd that the issue was not about who could vote but who counts the vote. He claims that’s what matters.

Despite his strange approach to the subject, Biden did turn a corner near the end of the appearance, suddenly seeming full of fire and life. After acknowledging that his administration “missed” on this implementation attempt, he vowed to keep fighting for reform for as long as he remained in the White House and had a breath in his body.

While Biden’s raised voice certainly could come from his passion for the subject, some wonder whether it contributes to the already burning questions surrounding his mental stability. Is the president’s agitated nature a result of yet another roadblock or a side effect of a concerning cognitive condition?