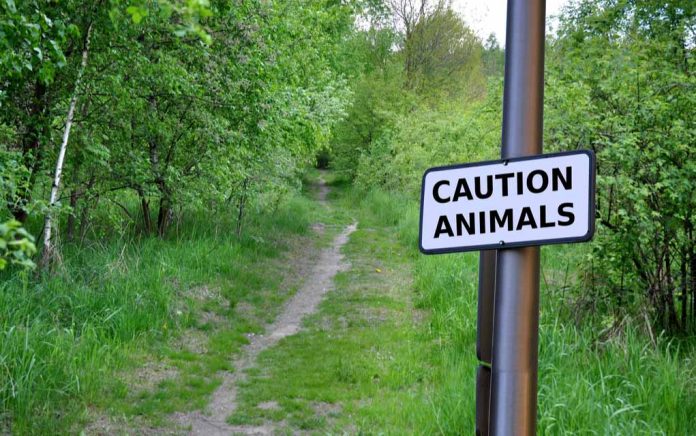 (LibertySons.org) – Anyone paying attention to Animal Planet programming knows about the deadly animals roaming Africa’s expansive plains. However, North America has its share of animals that can kill. It may come as a surprise, but many of the most dangerous animals roaming the United States aren’t the ones that immediately come to mind. Here’s a look at some of the scariest animals here at home.

Grizzly bears are giant and mighty beasts. You may run into one in the northwestern areas of the US, the Rocky Mountains, Canada, and Alaska. These animals may not be in the news very often for attacking people because encounters with humans are rare. But don’t let that fool you. When they do attack, it is usually incredibly deadly.

A bear investigates a deck in Clear Creek County.

For helpful information on living in bear country and what you can do to reduce human-bear conflicts, please visit us on the web 🔽https://t.co/9ZGhk8AJ6J pic.twitter.com/zn7fkzZMIt

Big animals like bears get a lot of attention regarding how much harm they can do, but some of the little ones can be just as bad. Found in the southwestern area of the US and parts of Mexico, the Arizona bark scorpion has a venom that causes extreme pain and can kill if left untreated.

The waters are also a deadly place. The great white shark can tear a human apart in no time with its rows of knife shark teeth. Fortunately, shark attacks do not occur very often.

One surprising addition to the list of dangerous animals is feral pigs. These animals are all over North America, and they will eat pretty much anything, including humans.

Coyotes may look like cute dogs, but they are quite vicious. They rarely attack humans, but if they do, it is often fatal. Fortunately, they are much more of a threat to farm animals and pets.

While these five animals are all pretty scary, none of them are the deadliest to humans. Every year, the animal that kills the most people will probably shock you because they are usually so cute and sweet. Deer kill an average of 200 people annually, mostly in car accidents. Isn’t that crazy?