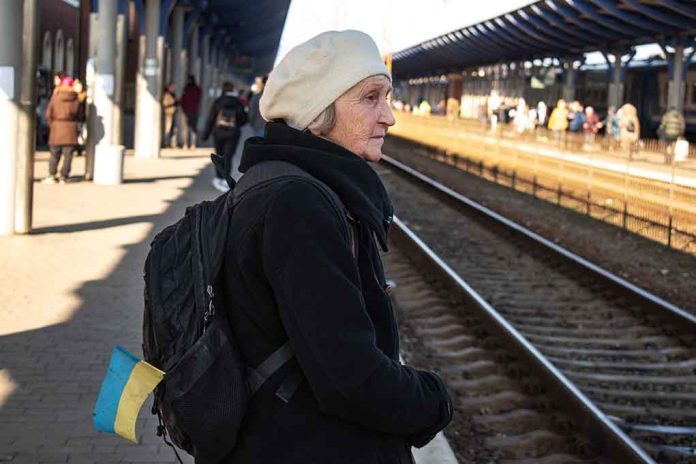 A WWII Reversal Has Just Occurred – So Many Victims

(LibertySons.org) – The conflict in Ukraine forced countless residents to leave their homes and their country. While many other nations are taking in these refugees, the oldest among them have limited options due to their advanced age. Reportedly, one of the best places for them to go is Germany. The problem is that many of these people are the same individuals who once had to flee for their lives from Germany for Ukraine during World War II.

The New York Times reported that many people who must now flee Ukraine aren’t strangers to bombings and death. Even though they are in their twilight years now, when they left their homeland all those years ago, they were children afraid of Nazis.

Today, they have to leave for safety from the Russians. In a cruel twist of fate, Russia was one of the countries that once saved them during WWII from a Jewish-hating regime.

For many of them, making the decision to leave the place that previously made them feel safe and secure to go somewhere that holds horrible memories from the past was not easy. The Times spoke with Galina Ploschenko, a 90-year-old Holocaust survivor. She’s moved to Germany because rescuers told her it was the “best option.”

Ploschenko had little choice but to leave. She was staying in a Dnipro retirement center, but airstrikes were putting her in danger. She could not get to the basement for safety because she was bedridden. But now, she has help from a Jewish group set out on rescuing people in her position.

The brave survivor may have been alone and scared as she waited for help in Ukraine, but she said at least she had her mother when she was a child fleeing Germany all those years ago. Although she was still scared, Ploschenko said the ordeal was much easier than it is now.

Most people could never dream of having to run from a warzone, but there is a whole group of people just like Ms. Ploschenko who are doing it for the second time in their lives. The Times reported that 78 elderly Holocaust survivors have evacuated so far from Ukraine.

There are 10,000 in the country, but getting them out isn’t easy. Rescuers can only take 50 people at a time. During the mission, they must travel across five countries, confront Russian soldiers who wish to confiscate their ambulances, and traverse around destroyed roadways. Coordination is also tricky because many elderly don’t want to leave, especially to return to Germany.

Rescue organizations often hear from people that they don’t want to go to Germany, and who could blame them? So, why are they evacuating there?

Part of the reason is the Claims Conference, an organization that keeps data on Holocaust survivors who left Germany as part of their restitution procedures. Because they have these lists, other groups can work with them to track down people who need to get out of Ukraine.

In addition, Germany is in the right location. It’s easy to get to in an ambulance and has a good healthcare system that can handle the needs of these aging survivors. The country also has a large Russian-speaking population, so there will be less of a language barrier.

The other option is Israel, but there are issues getting people there. They must fly, and many evacuees are not well enough for air travel.

For the Jewish people who once sought safety in Ukraine from the horrors of Germany, leaving Ukraine to go back to that country is as much of a mental struggle as it is a physical one. Still, they recognize things have changed. Ms. Ploschenko, for one, is now happy with her new home and is adjusting well.