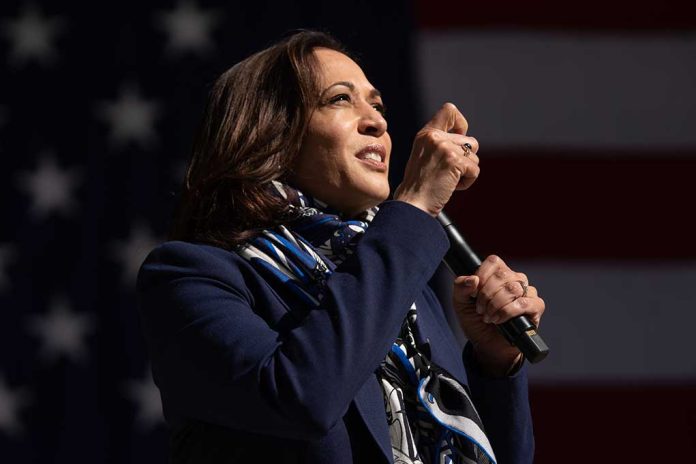 (LibertySons.org) – Actor Jussie Smollett made false claims about being attacked by racist police in 2019. When evidence eventually proved he fabricated the entire story, it left many on the Left scrambling to explain why they supported him in the first place. That includes Vice President Kamala Harris, who loudly proclaimed Smollet’s character at the time. Unfortunately, it wasn’t the first time for Harris to get it wrong — and it likely won’t be the last.

On January 29, 2019, Harris released a tweet where she touted Smollet’s personality and called out police for what she said was a “modern-day lynching.”

.@JussieSmollett is one of the kindest, most gentle human beings I know. I’m praying for his quick recovery.

This was an attempted modern day lynching. No one should have to fear for their life because of their sexuality or color of their skin. We must confront this hate.

The only problem? None of those claims were even remotely true. In fact, Harris was acting entirely on false evidence. She jumped the gun.

Harris was forced to walk back her claims just weeks after speaking out about Smollet’s apparent experience. It came to light that the actor staged the whole incident in a misplaced and vile attempt to boost his career, harming local police in the process.

Those controversial comments are now coming back to bite Harris in a big way. Yet, it isn’t even close to the first time for the VP to blunder over facts or align herself incorrectly.

Harris began making gaffes even before taking office. However, she’s racked up enough fumbles since then to prove her inability to serve as a public figure truly.

The VP’s most recent embarrassment stemmed from her space video. Intended to allow her to connect with the public over her love of science, it ultimately turned into a PR nightmare. Detractors criticized Harris for employing child actors and for hiring a Canadian production company, eventually bypassing companies on home soil in the process.

Then, too, there was the issue that Harris’ odd overacting was awkward and stilted at best. As a result, it was difficult to watch, which made the whole clip unappealing.

Similarly, after praising a student’s comments about Israel committing ethnic genocide, the vice president was also forced to do damage control. Members of her own party were outraged over the insinuation that she stood against the foreign nation.

Harris also walked back comments implying that rural Americans cannot secure identification, making it harder for them to vote on election day. And, again, the misdirected attempt to combat common sense voting integrity laws made the VP look horrible and out of touch with the average person living in the country throughout many areas of the US.

She even faced problems when addressing more significant crises within the Biden Administration. The mess at the southern border landed hard in her lap after the president tapped her to spearhead ongoing efforts to resolve the problem back in March. Harris not only failed to visit the area for months but also appeared to laugh at criticism over her lackadaisical approach in an exclusive interview with NBC news.

Harris has not yet attended the epicenter of the crisis after nearly two years in office. However, she traveled to El Paso in June, a trip that afforded her very little additional favor.

Biden’s total failure to properly manage the withdrawal of troops from Afghanistan also ended in disaster for Harris. After discussing the exit, she bragged about being the last one to leave the table and said she was happy with the plan. To add insult to injury, she opted to spend her time campaigning for Governor Gavin Newsome (D-CA) rather than aiding in efforts to rescue Californians stranded in the Middle Eastern nation.

Harris’ many missteps show just how disconnected she is from the reality of life on the political stage. Her priorities seem to oppose what voters want, yet she continues down the same path anyway. Is this why her poll numbers are in the gutter?