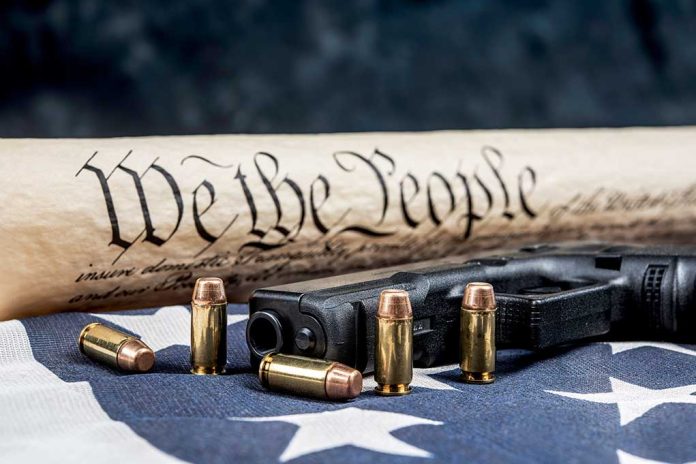 (LibertySons.org) – Known best for his documentary film about the deadly 1999 Columbine school shooting, Michael Moore has never been quiet about his political beliefs. Now, he’s proposing a change to the US Constitution that would essentially repeal the right to bear arms. The filmmaker published his proposal for the 28th Amendment on his website on July 10.

The proposed measure, which contains eight sections, focuses on the rights of people to be free from gun violence and dramatically reduces the ability to own a firearm by creating a system of complete regulation. Moore suggests a federal registration and licensing system that would only permit people to own a weapon for hunting, sports shooting, and if they have a “special need for personal protection.”

He also suggested continuous monitoring of law enforcement personnel. If a police officer expresses any “racist or violent behavior,” they would lose their job.

The proposal also gives Congress the power to regulate which types of firearms civilians could use and suggests immediately outlawing some specific models, like high-capacity weapons capable of holding more than six bullets. The Indie movie maker would also give the legislative branch the right to make further bans as they see fit.

Critics came down swiftly and harshly against Moore’s suggested amendment. Twitter buzzed with people speaking out against his ideas.

I read it, it’s a declaration of war on gun owners

Many people said the proposal would grant the federal government too much power. Some pointed out the addition would violate other parts of the Constitution. Critics also suggested the amendment was more about controlling people and less about stopping gun violence.

Michael Moore is smart enough to understand the political likelihood of a 2nd Amendment repeal is less than a tenth of a percent. This is the definition of white liberal self-righteous virtue signaling. https://t.co/4mQdRlJc6V

Constitutional changes require a two-thirds approval vote in Congress, with three-fourths of the states in favor of the measure. In the current climate, such an agreement would be unlikely.