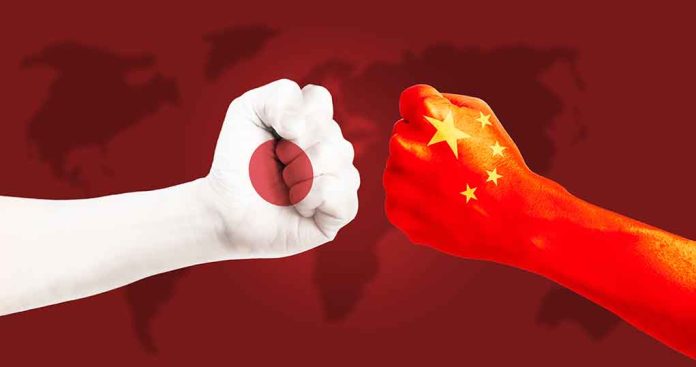 (LibertySons.org) – On June 8, the Global Times published an editorial warning Japan away from Taiwan. The state-run media outlet accused the nearby Asian country of trying to interfere with relations between Taiwan and China. In fact, the source spoke about the outsider stepping in, threatening to “break its leg” if Japan didn’t back off.

The Global Times suggested Beijing should "break the leg" of Tokyo if it tries to interfere with the China-Taiwan relationship. https://t.co/6hOTsT7KTQ

Chinese officials are concerned over rumors Japan is trying to place a Ministry of Defense official in Taiwan. The communist leaders see the move as a threat to national security and claim stationing someone on the island is Japan’s way of gathering intelligence. The translated headline of the piece was “Japan needs a head blow to wake up,” with a political cartoon accompanying the article alluding to Japan’s alliance with the United States.

The Central News Agency in Taiwan asked Japan for comment about the Global Times op-ed, but officials said they couldn’t provide information on internal operations.

Last September, Japanese Defense Minister Nobuo Kishi said what happens in Taiwan impacts Japan due to its close geographical location. He said the government would take any steps necessary to appropriately respond to any issues in the region and hopefully diffuse any tensions with calm discussions.