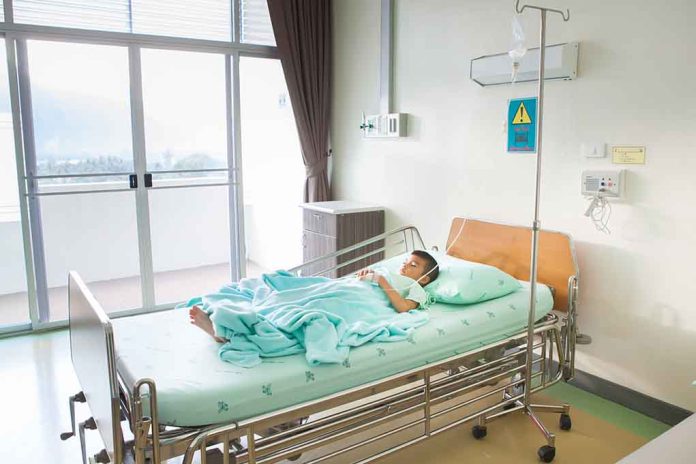 (LibertySons.org) – An exclusive report from The Epoch Times states children in China have fallen ill with leukemia after receiving COVID-19 vaccinations. The publication told the story of a 4-year-old, who developed swelling and pain after receiving the second dose of the vaccine. Upon taking the child to the doctor, her parents learned she had acute lymphoblastic leukemia.

The father, Li Jun (an alias to protect the family), said the child was completely healthy before the shots. She had a recent health check with no concerns.

Li Jun’s is among hundreds of Chinese that belong to a social media group claiming to be suffering from or have a household member suffering from leukemia, developed after taking Chinese-made vaccines. https://t.co/CZa3FQ7NO1

A doctor from the hospital treating the girl’s cancer informed the family that cases like this have doubled since the vaccination push. Li told how eight children in his local area alone recently died from leukemia.

The Epoch Times reports a WeChat group of parents who have experienced the same thing. They all say someone in their family had a cancer diagnosis after receiving the vaccinations. While the situation has occurred in people of all ages, Li Jun pointed to a trend in victims between the ages of 3 and 11 since the Chinese government began pushing immunizations for that age group.

When the government began urging parents to vaccinate their younger children, some parents resisted. They voiced safety concerns, and the World Health Organization had not authorized the Chinese vaccines for use in children. Despite objections, authorities threatened to kick children out of school, with businesses stripping employees of bonuses, if they opposed vaccinations.

Li Jun continues to fight by requesting investigations, but he hasn’t gotten far. Authorities promise to look into the link between the immunizations and the cancer diagnoses, but nothing has happened yet, and Li’s family has faced threats from officials who wish to silence them.