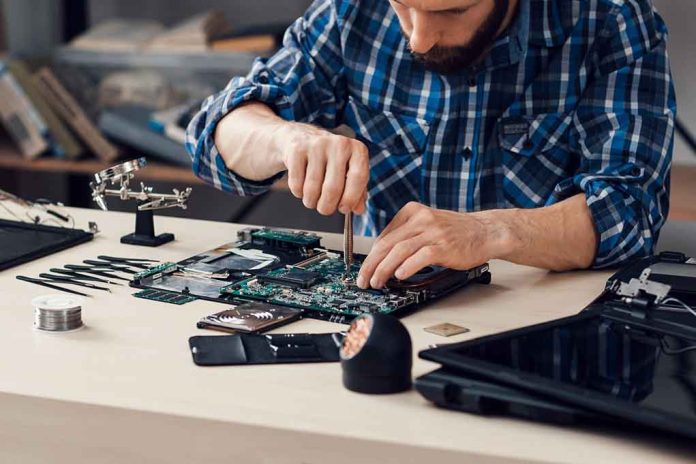 (LibertySons.org) – John Paul Mac Isaac, the computer shop owner who discovered Hunter Biden’s laptop, released a book detailing his experience trying to get the device to authorities. “American Injustice: My Battle to Expose the Truth,” which became available on November 22, covers how the good deed snowballed into a life-changing saga. The author spoke about the book and what he’s gone through on “America’s Newsroom” on November 21, revealing some shocking accusations against the FBI.

Mac Isaac owned a repair shop in Delaware, where Hunter Biden took a laptop for service. When the president’s son failed to pick up his device, the store owner discovered disturbing content he felt might be a matter of national security. Mac Isaac attempted to hand it over to the FBI but faced multiple hurdles.

Once the laptop and its contents became public, the business owner said the media and others began attacking him. He even feared for his safety.

Eventually, the agency took the computer into custody. Still, its contents have never been introduced in court, and there has been no official ruling on the validity of the data or any links connecting nefarious business dealings to President Joe Biden.

However, CBS News conducted an independent review of the data from the proposed laptop. The investigators received a copy of the exact data turned over to the FBI, not that which made its rounds in the media, from Mac Isaac’s attorney. They found it to be legitimate and noted it didn’t show any signs of tampering. In addition, they were able to verify the contents of the computer were all from before the date Mac Isaac claimed Hunter Biden dropped it off at the shop.

Mac Isaac spoke about the laptop saga with show host Bill Hemmer. He told about an incident with an FBI agent who spewed a veiled threat at him when he mentioned writing a book about his experience. He said the official wanted to scare him to keep quiet about the matter.

The former repair store owner also claimed retaliation has been ongoing since the public became aware of the infamous electronic. He doesn’t expect that to stop.

But Mac Isaac noted he is working with top Republicans and has given them the details of his interactions with the FBI, including providing them the computer’s contents. The House GOP revealed plans on November 17 to investigate Hunter Biden. Members also want to look into the president’s knowledge and ties to his son’s business dealings when they take the majority in January 2023.

Mac Isaac gave his opinion about the inquiry into the Biden family. He proposed the investigation look into the how the FBI handled the situation and what the family was “up to” when the US leader was vice president. He expressed confidence that House Republicans can finally put this matter to rest and seek appropriate justice.