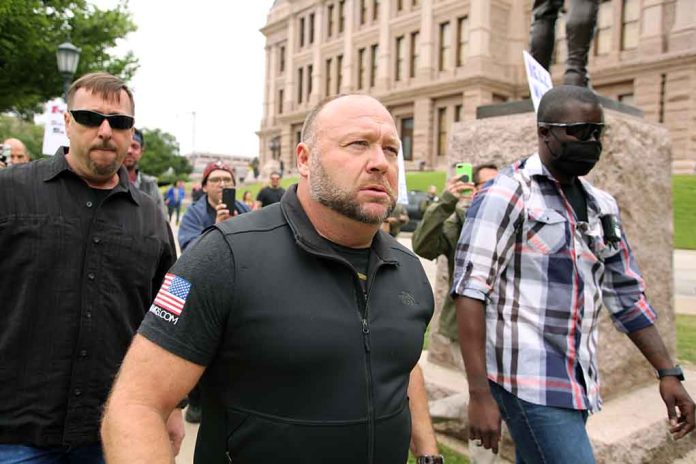 (LibertySons.org) – The New York Times reported on April 17 that three of Alex Jones’ companies filed for bankruptcy protection in Texas. The filings follow multiple lawsuits and judgments against Jones for his hoax claims regarding the Sandy Hook school shooting in 2012. Bankruptcy puts a stay in place and prevents further civil litigation or collection against assets.

Infowars has filed for Chapter 11 bankruptcy protection as the website’s founder and conspiracy theorist Alex Jones faces defamation lawsuits over his comments that the Sandy Hook Elementary School shooting was a hoax. https://t.co/IfPS8MF8mG

One of the outlets, Infowars, is a main target of parents and families of the Sandy Hook victims who say Jones is guilty of defamation for spreading fake information about the incident. Due to his claims that the shooting was a staged event and the victims didn’t exist, the families say they have suffered harassment.

The Chapter 11 bankruptcy filing for Infowars, IWHealth, and Prison Planet TV will allow for the reorganization of the companies’ finances. It also permits creating a long-term repayment plan to creditors, which include the families of Sandy Hook victims from past court cases.

Jones currently has trials in Texas pending to determine damages and a case set to begin in Connecticut in September. The father of one of the victims, Neil Heslin, told the AP that he’s unsure how the bankruptcy will impact his case in Texas but that Jones seems to be trying “everything to avoid everything” when it comes to the lawsuits.