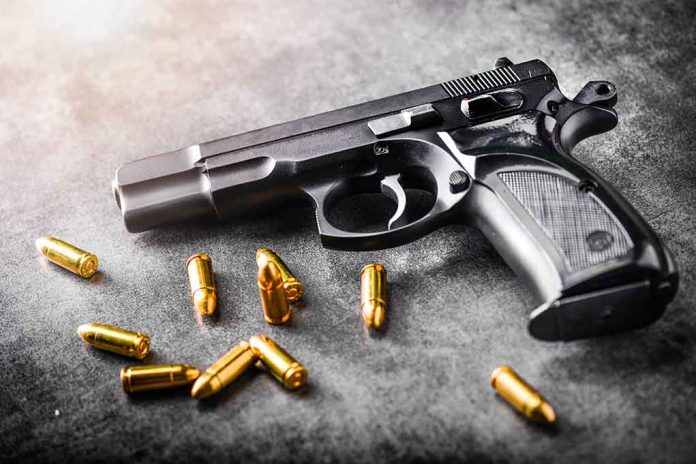 (LibertySons.org) – Unified Police District of Greater Salt Lake released body cam footage from an incident that occurred on February 21. It shows a 4-year-old shooting at police as they arrested his father outside a McDonald’s in Midvale, Utah. Nobody suffered severe injuries in the altercation, but it could have been much worse.

The Unified Police Department of Greater Salt Lake released bodycam footage of a 4-year-old boy shooting his father's gun at officers in a McDonald's parking lot on February 21, 2022. pic.twitter.com/J1YHSRpLzT

The situation began when police responded to a 911 call reporting that a male customer pointed a gun at employees in the drive-thru for getting his order wrong. Officers approached the vehicle and asked the alleged perpetrator, Sadaat Johnson, to step out, but he refused to cooperate. Authorities pulled him from the car and began taking the man into custody.

Officials had Johnson on the ground as they were handcuffing him when one noticed a gun pointing out of the vehicle’s rear window. The officer alerted everyone on the scene, but before anyone could react, the weapon fired. Luckily, someone noticed it was a child holding the firearm and made others aware. They were able to remove the boy safely from the car without further incident.

The gun-wielding minor said he wanted the cops to let his father go and that his dad had instructed him to shoot the police. Sheriff Rosie Rivera called it a “sad day” when a parent tells their child to use a firearm against law enforcement. The official noted the incident was a direct result of the “campaign against police.”

Johnson faces charges of felony child abuse and neglect and aggravated assault. Prosecutors also charged him with a misdemeanor for interfering with an arresting officer. He is being held without bail pending court proceedings.